Pioneering missionaries in Korean mission field looked at themselves. They were from many different countries and different denominations. They didn’t want to vie for territories. They sought harmony instead of conflict. So they came to an agreement on territorial division. Canadian missionaries chose north eastern territory, which was a mountainous region with a scanty population concentrated on a few wide plains or scattered along the fertile coastal strip and in the narrow valleys between the mountain ranges. Mission Stations were set up one by one: Wonsan Mission by Rev. Foote, Hamheung Mission by Rev. MacRae and Sungjin Mission by Rev. Grierson. Later and on, Canadian missionaries extended their reach further to Manchuria and Siberia to serve immigrating Koreans. 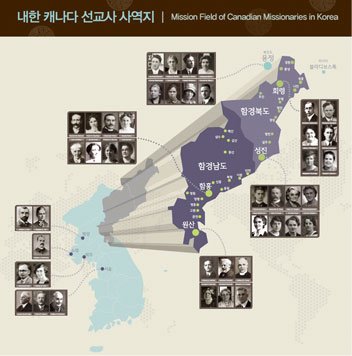 Its beginning owes much to the Holiness Movement of the evangelist Dwight L. Moody. James Gale, Malcolm Fenwick, Robert Hardie, Oliver Avison and William MacKenzie were all influenced directly or indirectly by Moody’s touching messages and by The Student Volunteer Movement. It was nothing short of God’s provision that Wonsan Spiritual Revival and Pyongyang Great Awakening happened in the line of mass revival started by D. L. Moody in Chicago four decades before.

Among the relics displayed here are items donated by Phillies, daughter of Sherwood and Marian Hall.